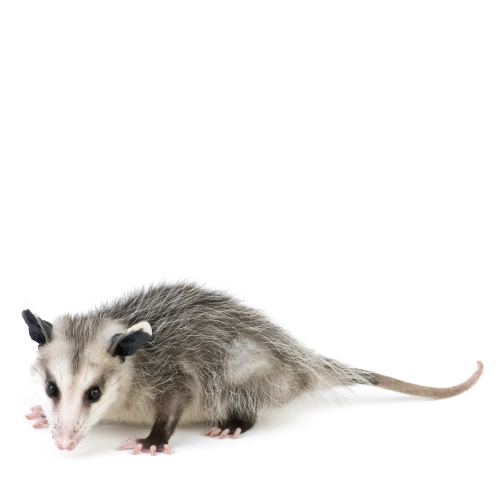 Description: The opossum is a marsupial of the order Didelphimorphia endemic to the Americas. The largest order of marsupials in the Western Hemisphere, it comprises 110+ species in 19 genera. Opossums originated in South America and entered North America in the Great American Interchange following the connection of the two continents. Their unspecialized biology, flexible diet, and reproductive habits make them successful colonizers and survivors in diverse locations and conditions.

There are several dozen different species of opossum, which are often called possums in North America. The most notable is the Virginia opossum or common opossum—the only marsupial (pouched mammal) found in the United States and Canada.

Reproduction
A female opossum gives birth to helpless young as tiny as honeybees. Babies immediately crawl into the mother’s pouch, where they continue to develop. As they get larger, they will go in and out of the pouch and sometimes ride on the mother’s back as she hunts for food. Opossums may give birth to as many as 20 babies in a litter, but fewer than half of them survive. Some never even make it as far as the pouch.

Scavenger Behavior
Opossums are scavengers, and they often visit human homes or settlements to raid garbage cans, dumpsters, and other containers. They are attracted to carrion and can often be spotted near roadkill. Opossums also eat grass, nuts, and fruit. They will hunt mice, birds, insects, worms, snakes, and even chickens.

“Playing Possum”
These animals are most famous for “playing possum.” When threatened by dogs, foxes, or bobcats, opossums sometimes flop onto their sides and lie on the ground with their eyes closed or staring fixedly into space. They extend their tongues and generally appear to be dead. This ploy may put a predator off its guard and allow the opossum an opportunity to make its escape.

Tree Climbing
Opossums are excellent tree climbers and spend much of their time aloft. They are aided in this by sharp claws, which dig into bark, and by a long prehensile (gripping) tail that can be used as an extra limb. Opossums nest in tree holes or in dens made by other animals.

These animals are widespread and are sometimes hunted as food, particularly in the southern United States.